A FATHER TO YOU 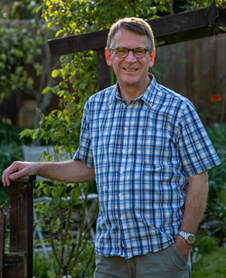 My story of relating to God as Father began in 1982 at a youth camp in the Lake District. One of the leaders, Dave Richards who is now a pastor in Basingstoke Community Church, came over and made a simple prophetic statement along the lines: "Mark - you have learned to be a servant but God wants you to know that you are a son and He is your Father". He then prayed that I would learn to be a son and that I would relate to God as my Father. For a while I sat in the chair saying "Father - Daddy" and I know that I received a revelation of the Father's heart that January evening.

Of course my story began several years earlier. I was born into a Christian family and grew up in that loving environment. My parents were great! They loved all of us children (I have three sisters) and really wanted the best for us. In August 1971 I became a Christian at a youth camp run by my Uncle and Aunt and remember telling my Mum and Dad about this on the way home. A few months later, in October, something happened that changed the course of our family's life. My father was killed in a road accident which left us, as a family, devastated.

Over the years my mother has been fantastic in bringing us up and giving us whatever opportunities she could. I am very grateful and blessed to have had such a mother. Since my Dad died there have been many times that I have really missed him and wanted him to be around. I went through my teenage years without that guiding hand we all so need. When Fiona and I were married I wanted him to share the day with us and when our children were born I wanted them to have a grandfather as well as grandmother.

In May 2002 Fiona and I went to Toronto, Canada to a conference hosted by the Toronto Airport Christian Fellowship. The conference theme was "The Father Loves You" - this week completely changed us in many ways. God was gracious and met us both, bringing healing and restoration in many areas of our lives, some of which we were not expecting or asking for! I received a deeper healing relating to the death of my father and a lot of things I had struggled with for years fell away.

The main thing, though, was feeling that the revelation of God as Father, which I had tasted 20 years previously, came completely alive. I knew that, not only did God want to be a Father to me but that HE ACTUALLY WAS! I found a greater level of intimacy with God that I believe has completely changed my understanding and experience of Him. Many of us have a good understanding of God as Father but that becoming an experience and a lifestyle is something completely different. Since then we have been on a journey of the heart, allowing our hearts to come alive and our passion for the Father to grow.

Following our time in Toronto we met James and Denise Jordan who have become very good friends and continue to show us the heart of the Father and lead us in this growing revelation. Their lives of rest and dependence on Father are a wonderful example to us.

We have found, and keep on finding, that the goal of our journey is not to survive the trials of life and get through to Heaven. We have found that the goal of our journey is a growing intimacy with our Father. We are very much 'work in progress' but by God's grace we have begun, and want to share this truth with you.
​
We trust that through this website you, too, may discover the Father who loves you and who wants to be a Father to you.